How to Read Your Eyeglass Prescription

An eyeglass prescription is a written order by an ophthalmologist or an optometrist to an optician for eyeglasses. It specifies the parameters to which the eyeglasses are to be made in order to correct blurred vision due to refractive errors, including myopia, hyperopia, astigmatism, and presbyopia. It is typically determined using a phoropter or an automated refractor.

What is OD and OS?

The first step to understanding your eyeglass prescription is knowing what "OD" and OS" mean. They are abbreviations for oculus dexter and oculus sinister, which are Latin terms for right eye and left eye. Your eyeglass prescription also may have a column labeled "OU." This is the abbreviation for the Latin term oculus uterque, which means "both eyes." Though the use of these abbreviated Latin terms is traditional for prescriptions written for eyeglasses, contact lenses and eye medicines, some doctors and clinics have opted to modernize their prescriptions and use RE (right eye) and LE (left eye) instead of OD and OS. You may have noticed that on your prescription form the information for the right eye (OD) comes before the information for the left eye (OS). Eye doctors write prescriptions this way to avoid making errors, because when they face you, they see your right eye at left (first) and your left eye at right (second).

Your eyeglass prescription contains other terms and abbreviations as well. These include:

The term "sphere" means that the correction for nearsightedness or farsightedness is "spherical," or equal in all meridians of the eye.

Cylinder (CYL). This indicates the amount of lens power for astigmatism. If nothing appears in this column, you have no astigmatism. 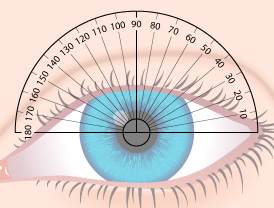 If an eyeglass prescription includes cylinder power, it also must include an axis value, which follows the cyl power and is preceded by an "x" when written freehand.

Add. This is the added magnifying power applied to the bottom part of multifocal lenses to correct presbyopia. The number appearing in this section of the prescription is always a "plus" power, even if it is not preceded by a plus sign. Generally it will range from +0.75 to +3.00 D and will be the same power for both eyes.

Prism. This is the amount of prismatic power, measured in prism diopters ("p.d." or a superscript triangle when written freehand), prescribed to compensate for eye alignment problems. Only a small percentage of eyeglass prescriptions include prism.

When present, the amount of prism is indicated in either metric or fractional English units (0.5 or Â½, for example), and the direction of the prism is indicated by noting the relative position of its "base" or thickest edge. Four abbreviations are used for prism direction: BU = base up; BD = base down; BI = base in (toward the wearer's nose); BO = base out (toward the wearer's ear).

Sphere power, cylinder power and add power always appear in diopters. They are in decimal form and generally are written in quarter-diopter (0.25 D) increments. Axis values are whole numbers from 1 to 180 and signify only a meridional location, not a power. When prism diopters are indicated in decimal form, typically only one digit appears after the period (e.g., 0.5).

Blur is the subjective experience or perception of a defocus aberration within the eye. Blur may appear differently depending on the amount and type of refractive error. The following are some examples of blurred images that may result from refractive errors:

Blur is corrected by focusing light on the retina. This may be done with eyeglasses or contact lenses, or by altering the shape of various eye structure via refractive surgery or special contact lenses.

Eyeglasses sometimes have unwanted effects including magnification or minification, distortion, color fringes, altered depth perception, etc. Although many people think of lenses as magnifiers, the lenses within eyeglasses improve vision primarily by reducing blur. Depending on the optical setup, they may also produce magnfication or minification of images which may or may not be intentional or desirable.

The values indicated in the "sphere" and "cylinder" columns of an eyeglass prescription specify the optical power of the lenses in diopters, abbreviated D. The higher the number of diopters, the more the lens refracts or bends light. A diopter is the reciprocal of the focal length in meters. If a lens has a focal length of 1/3 meters, it is a 3 diopter lens.

A +10 diopter lens, which has a focal length of 10 centimeters, would make a good magnifying glass. Eyeglass lenses are usually much weaker, because eyeglasses do not work by magnifying; they work by correcting focus. The eye itself has a refractive power of 60 diopters.

This series of pictures shows the shadow cast by a pair of 1 diopter drugstore "reading glasses" outdoors in sunlight as we hold it farther and farther away from a wall. As the distance from the wall increases, the shadow of the frame seems to thicken and the bright area in the center gets smaller and brighter. It slowly changes from being "eyeglass-shaped" to circular.

Negative lenses spread sunlight instead of concentrating it.

A -3 lens stacked on top of a +3 lens looks almost like flat glass, because the combined strength is 0.

In science textbooks, positive lenses are usually diagrammed as convex on both sides; negative lenses are usually diagrammed as concave on both sides. In a real optical system, you usually get the best optical quality when most rays of light are roughly normal to the lens surface. In the case of an eyeglass lens, this means that the lens should be roughly shaped like a cup with the hollow side toward the eye. So most eyeglass lenses are meniscus in shape.

Whatever the setup, spherical lenses act equally in all meridians: they magnify, introduce blur, or correct blur the same amount in every direction.

An ordinary magnifying glass is a kind of spherical lens. When a spherical lens acts as a magnifier, it magnifies equally in all meridians. Here, note that the magnified letters are magnified both in height and in width.

Similarly, when a spherical lens puts an optical system out of focus and introduces blur, it blurs equally in all meridians: 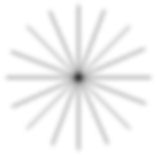 Amount of refractive error and degree of blur 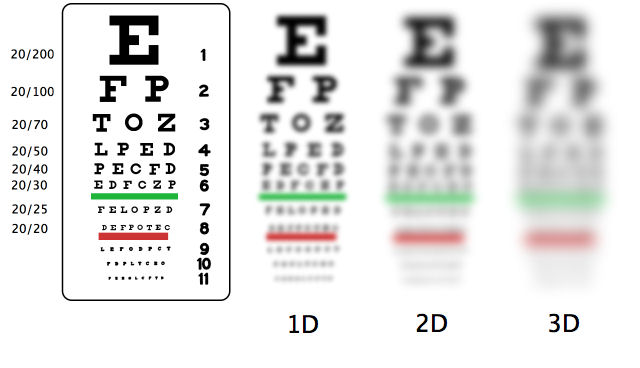 The leftmost image above shows a Snellen eye chart as it might be seen by a person who needs no correction, or by a person who is wearing eyeglasses or contacts that properly correct any refractive errors he or she may have.

The images labelled 1D, 2D, and 3D give a very rough impression of the degree of blur that might be seen by someone who has one, two, or three diopters of refractive error. For example, a nearsighted person who needs a -2.0 diopter corrective lens will see something like the 2D image when viewing a standard eye chart at the standard 20-foot distance without glasses.

A very rough rule of thumb is that there is a loss of about one line on an eye chart for each additional 0.25 to 0.5 diopters of refractive error.

The top letter on many eye charts represents 20/200 vision. Many people cannot read even this top letter without glasses. The definition of legal blindness is not based on vision without glasses. The U. S. Social Security administration, for example, states that "we consider you to be legally blind if your vision cannot be corrected to better than 20/200 in your better eye." In other words, what matters in evaluating legal blindness, and for many other purposes, is corrected acuityâwhich line of the chart can be read with proper lenses. One purpose in which uncorrected vision makes a difference is for receiving a driver's licence that is good without lenses; a person who needs lenses may receive one that requires them to wear the said lenses.

Some kinds of magnifying glasses, made specifically for reading wide columns of print, are cylindrical lenses. When a cylindrical lens acts as a magnifier, it magnifies only in one direction. For example, the magnifier shown magnifies letters only in height, not in width.

Similarly when a cylindrical lens puts an optical system out of focus and introduces blur, it blurs only in one direction. 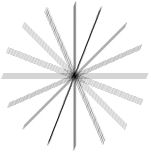 This is the kind of blur that results from uncorrected astigmatism. The letters are smeared out directionally, as if an artist had rubbed his or her thumb across a charcoal drawing. A cylindrical lens of the right strength can correct this kind of blur. When viewing an eye chart, this is how this kind of blur might appear:

Compare it to the kind of blur that is equally blurred in all directions.

When an eye doctor measures an eyeâa procedure known as refractionâusually he or she begins by finding the best spherical correction. If there is astigmatism, the next step is to remove it by adding the right amount of cylindrical correction.

Astigmatism, however, causes a directional blur. Here are two examples of the kind of blur you get from astigmatism. The letters are smeared out directionally, as if an artist had rubbed his or her thumb across a charcoal drawing.

But notice that in addition to being smeared more, the second example is smeared out in a different direction.

A spherical lens is the same in all directions; you can turn it around, and it doesn't change the way it magnifies, or the way it blurs:

A cylindrical lens has both a strength and an axis. Turning it around so that the axis points in different directions changes the way it magnifies, and the way it blurs. 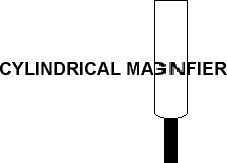 The axis specification on a prescription gives the orientation of the axis of the cylindrical correction, and it can vary from 1 to 180 degrees: 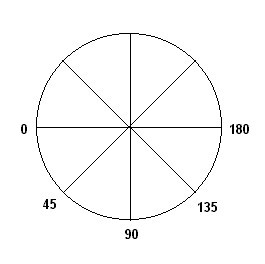 Distant vision and near vision

The NV portion is used in prescriptions for bifocals.

This is called "presbyopia;" the "presby-" root means "old" or "elder." (It is the same root as in the words "priest" and "presbyterian".)

The hardening of the lens is a continuous process, not something that suddenly happens in middle age. It is occurring all along. All that happens around middle age is that the process progresses to the point where it starts to interfere with reading. Therefore almost everybody needs glasses for reading from the age of 40-45.

Because young children have a wider range of accommodation than adults, they sometimes examine objects by holding them much closer to the eye than an adult would.

This chart (which is approximate) shows that a schoolchild has over ten diopters of accommodation, while a fifty-year-old has only two. This means that a schoolchild is able to focus on an object about 10 cm. (4") from the eye, a task for which an adult needs a magnifying glass with a rated power of about 3.5X. 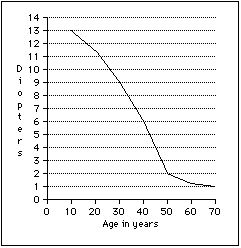 The NV correction due to presbyopia can be predicted using the parameter age only. The accuracy of such a prediction is sufficient in many practical cases, especially when the total correction is less than 3 diopters. See also the following calculator for computing this correction.

There is a surprising amount of variation in the way prescriptions are written; the layout and terminology used is not uniform.

When no correction is needed, the spherical power will sometimes be written as "0.00" and sometimes as "Plano" or "Pl" because the lens, although not flat, is optically equivalent to a flat piece of glass.

When cylindrical correction is needed, the mathematics and optics of the way lenses combine mean that there are two different ways to write the same correction. One is called the plus-cylinder form and the other the minus-cylinder form. These two prescriptions are equivalent: